skip to main | skip to sidebar

Word on the Street was a big success for all involved at the Burningeffigy table. In spite of my reservations, I sold six copies of Epoch, one copy of Attack of the Intergalactic Soul Hunters, three copies of Section K, and a few copies of my chapbook, Product of a Deranged Bottom. Monica, who paid for the table, told me she broke even for the first time at Word on the Street, and my friend Jeff sold many copies of his new chapbook, Guilt Pasta. I was very happy with how the day went.

Two amusing things happened. A kid asked me why Epoch is about the end of the world, and I replied, "Because it's funny!" She backed away quickly. Another kid picked Epoch up and flipped through it, then sadly said, "Aww, it's a book!" Not sure what he was expecting, but a novel wasn't it. I had to laugh at that.

Two weeks from now, Violet and I will be attending Con*Cept in Montreal. I strongly suspect Epoch will do very well there. I can't wait!

I must go now. Karma is trying to eat my shoes.
Posted by Timothy Carter at 5:52 PM 6 comments:

Word On The Street Tomorrow

Tomorrow I will be going to Queen's Park for Word on the Street, the annual literary festival featuring authors and booksellers and, most importantly, readers. My friend and editor Monica has reserved a booth there, and will be showcasing all the authors published by her press, Burningeffigy. Those authors are:
11:00am-1:00pm – Gemma Files
1:00pm-2:00pm – Jeff Cottrill
2:00pm-3:00pm – Adebe D.A.
3:00pm-4:00pm – Timothy Carter
4:00pm-6:00pm – Brett Alexander Savory & Gord Zajac

Each author will have a one-hour window in the booth throughout the day. My time is from 3:00 PM until 4, just in time for tea. An hour is not a lot of time to make a lot of sales, and I have to admit this format is fairly disappointing. Last year I helped Monica to run the booth, stayed for the whole day, and sold over 20 copies of Attack of the Intergalactic Soul Hunters. Of course, this year she is promoting many more authors. Space is limited, and so is time. I understand that. I'll just have to make the most that I can out of that hour.

Wish me luck!
Posted by Timothy Carter at 2:49 PM 2 comments:

My New Blog - Check It Out!

Again, I failed in my goal to write two chapters of Kids Who Know this week. I got through half of one. There is, however, a reason for my slow output on that novel - I've been working on another writing project.

Allow me to introduce my new blog, Biblical Proportions. Those who know me, know I have a bone to pick with organized religeons, Christianity in particular. There's a fair bit of that in my latest novel, Epoch, and a whole lot more in the upcoming (soon, I hope!) The Right Hand of Evil. I've collected a whole bagful of religious tracts over the years, some for research purposes, some for story ideas. I finally decided to do something really fun with them, and Biblical Proportions is the result. In this new blog, I review tracts. I treat them as a form of art, and critique them based on five categories:

1. Likely to Convert
Exactly like it sounds. How likely is it that the tract I'm reviewing will achieve its goal of converting its reader to the Christian faith?

3. Ability to Hold Interest
Some tracts are boring as hell (pun absolutely intended). This category lets readers know which ones have content worth actually looking at, such as...

4. Unintentional Hilarity
Some tracts are really funny for all the wrong reasons. They try to be deadly serious about the peril of your mortal soul, but end up providing guffaws instead of Salvation. They are so serious that you can't take them seriously (seriously!), which is at least better than the final category...

5. Level of Disturbing or Offensive Content.
I've read many that go after the gay community, citing a few out-of-context Bible verses as their justification. Others attack other religions, saying that Christianity is the only way to God. Some are simply in very bad taste - there's one I've just reviewed that suggests the victims of the 9/11 terrorist attacks might be in Hell now if they hadn't accepted Jesus. These are the tracts that fill me with anger, and deserve to be exposed for what they are.

So that's what I've been doing with most of my spare time. Check out Biblical Proportions, where tracts (and someday, videos and websites) face the wrath of my judgment!
Posted by Timothy Carter at 9:25 AM 5 comments:

More Notes From The Wooden Racist

Well, I didn't succeed in my goal for this week. I'm mostly done one chapter, but not the two I'd aimed for. I've just been sluggish. Still, I don't think that two chapters a week is an unreasonable goal. I'll get back into the swing of things.

Karma just came home from the vet this morning. He's just had The Operation, if you know what I mean. The big snip. Rhymes with tutored. I missed the little bugger last night, so I'm sure glad to have him back now. I treated him to a plate of tuna, which he woofed in less than a minute. That's my boy!
Posted by Timothy Carter at 7:38 AM 4 comments:

My publicist at Flux sent word to me of a review of Epoch in The Globe and Mail. Naturally this got me very excited, so I followed the link and read the review...

Ouch. Not only did the reviewer say the book was "wooden", he subtly accused me of being a racist. Never saw that one coming. I got served, big time.

You can find the review here.

There's no such thing as bad publicity, but still...
Posted by Timothy Carter at 4:41 PM 4 comments:

I haven't been having a very creative weekend so far, and it's almost over. I've been feeling a bit blocked, and not at all sure why. My new book, Kids Who Know, was going so well, and then I seemed to hit a wall. That's been happening far too often this year for my liking. Money stress and creative output do not mix well.

Still, I'm up to five chapters on Kids Who Know, and I also added another couple of chapters to Cupidity. I'm also typing up what I've written so far of The 25 Demons You Meet In Hell. Maybe I just need to jump from project to project this year. If that's what keeps me going, then so be it.

I had a nice family get-together today. My aunt Anne turned 75 (or she will on Tuesday), so a large number of family got together to celebrate. Whenever I attend these family events, I always spend most of my time with my cousins' kids. I just love kids. Especially them. After all, they (and others like them) are the ones I'm trying to reach with my novels (most of them, anyway). That, and I'm a big kid myself.

I'm going to set a goal for myself this week - two chapters of Kids Who Know, written by the time I come home from work on Friday. I'll post again then to let you all know I succeeded.
Posted by Timothy Carter at 3:57 PM 2 comments:

Just felt like sharing a few more pictures of our wonderkitty. Enjoy! 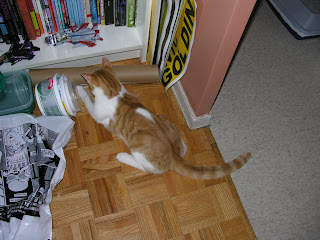 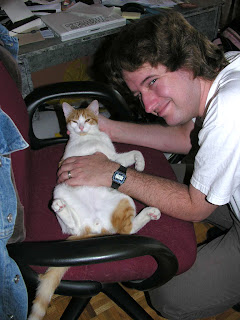 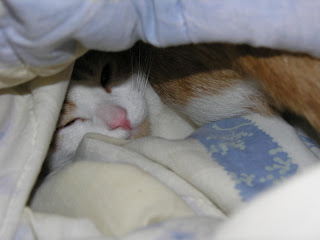 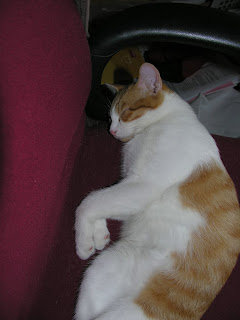 I just learned that a digital copy of Closets sold last month. That brings its worldwide total up to... two copies. That's right, there's the copy my mom bought last year, and then this latest one. I gave out a lot of flyers for Closets at the convention last weekend; likely the sale was due to one of those.

Promotion does work! Yay!
Posted by Timothy Carter at 10:08 AM 2 comments:

Timothy Carter
Timothy Carter was born in Farnham, England during the week of the final lunar mission, and he turned 13 on Friday the 13th. He is a novelist, screenwriter, movie lover and Transformers fanatic.